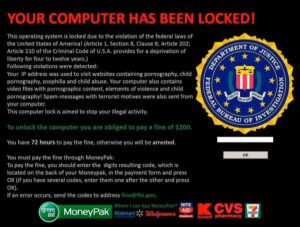 Does this look genuine to you?

Not a day goes by that I don’t get an email, letter or phone call asking what Antivirus someone should be using. This question is usually followed by specific questions about either an infection or some bizarre computer behavior. I typically ask a couple questions, give them the answer and send them on their way. However recently I have been running into the opposite where people are beginning to think that they don’t need any antivirus or anti-malware security software or that running free versions are good enough. In almost all cases I find the same results. A computer literally infected up to its neck with malware; many of these computers are used in businesses that handle YOUR CONFIDENTIAL INFORMATION (read tax returns, social security numbers), information that could create massive problems for you if it got into the right persons hands.

Each and every time I have looked at these systems, I am catapulted into the same pile of lame excuses. Individual or Company X didn’t want to spend the money on Antivirus software and then they proceed to come up with a convoluted story to justify this decision. I have literally heard it all! The software is too expensive. We don’t do anything on these computers to get infections. No one browses the internet here. We only do business stuff on these computers, and the list goes on. Each and every time I hear these; a fuse inside me lights and I want to lash out and choke the imbeciles. Let me be absolutely clear, every excuse I have ever heard has also been a complete and utter lie; with the exception of “This software is too expensive”, which really means “I am too cheap to spend the money to protect myself and my clients information.” This also means if you are a business owner doing this, CLOSE YOUR DOORS NOW!

The average user sitting at a company doesn’t have the technical knowledge or experience to identify a safe website. In fact in my studies and experience the #1 problem I find with people is that many of them do not understand the difference between a website address and searching its name through a search bar. Let me say that again for those who didn’t catch it the first time. THEY DO NOT KNOW WHAT A WEBSITE ADDRESS IS. If you ask them to go to the address bar and type in “www.google.com” they will ignore the “www” and the “com” part and type google in the search bar and pick from the first 5 links that are displayed. Is it no wonder these people get conned into opening spam email attachments & hijacked links from an internet search? Is it really surprising that many of them have 3-4 toolbars on average installed on their computer? And the best answer I can get out of them when I ask them if they know what these are and what they do is “I didn’t install that”. Which brings me to my next point, the computer for these people is the master and they are its obedient slave. Think I am being unrealistic? I challenge you to test this next time you walk into an office. If there is a pop-up window asking someone to install something, the first and often only choice is yes. The individual gives it no second thought; they just click away and allow the installation to go through. I have tested this countless times with individuals. I purposefully go to a website I know will hit them with a popup to install some bogus toolbar or a fake update for Java/Adobe Flash. These people are like moths to the flame. They immediately click yes and then fall back on; the computer told me to install it. When shown why they shouldn’t have installed it or worse that its stealing their keystrokes for those online accounts they log into everyday they almost always shutter the same response “Well you can fix it right? I am safe right?” No Patty Pushalots you are not safe and if the information has already been transmitted to a remote server, which is the likely outcome of many of these situations because the infections are only noticed months down the road because of additional infections, there isn’t anything you can do except hope no one on the other end actually looks at the information.

So why does this happen? Why do nearly 8/10 people I come across lack basic understandings about computers, but more important the internet? It’s a twofold problem, first the individuals never took the time to learn & second they refuse to pay for anti-malware protection. Let’s see, didn’t take the time to learn, but doesn’t think they need anti-malware protection. Can you see the problem compounding here? That isn’t where it ends though. About 4/10 are from the baby boomer generation. The other half, well you might want to sit down for this, are between the age of 16-30. Surprised? I am not! These people were not taught from their parents, because their parents didn’t know. When they become adults, their parents play the reverse role and expect their children to help them with a computer. It’s no wonder we have a generation of people that do not know basic principles about browsing the internet.

Back to the core problem though, these individuals still refuse to pay for anti-malware protection, even after consecutive infections are found and cleaned out. I don’t know if this is a pride or ego dilemma, but these people need to let it go! If you are someone with no protection or free protection only its time you spent the money to protect yourself. The issue with free versions of antivirus and anti-malware software is that they do not have active protection. They do not monitor your system (and YES IT NEEDS TO BE MONITORED) constantly looking for or blocking possible infections. I run into the same scenario all the time. Over proud person A from Company X says to me, look I installed antivirus software Y on my workstation, I know what I am doing. Usually when I hear this, I sit back and say go on. Then they go on for about 30 more seconds about their wonderful achievement like I am going to congratulate them and give them a medal or something. After the 30 seconds I reach over, take control of their mouse open up the antivirus and find that the last scan it ran was over 6 months ago, the same day the antivirus was installed. Then I turn and say to them, so you think running a scan 6 months ago is going to protect you today? What about yesterday or tomorrow? The answers I have received over the years have been everything from hilarious to downright stupid but in all of the answers I always hear at some point, but isn’t it supposed to scan on its own?

STOP! NO SERIOUSLY HOLD ON TO YOUR LUG NUTS IT’S TIME FOR AN OVERHAUL!!

People, the point of purchasing security software is so that you can schedule it to automatically scan, and you can enable active protection. These free versions DO NOT provide these features. These are the only features that matter. The average person doesn’t have time in his or her day to sit down and manually scan their computers using free antivirus or anti-malware software. Additionally, many of these free tools then ask the individual what they want to do if infections are found, at which point again most people do not know what to do so they close the program out and allow the infections to remain on the system thinking the software already removed them because they ran a scan. On top of that the average scan time can take 1-3 hours to complete. If you have above average files or are a person who installs every junk program you see the time it takes to complete a scan could increase exponentially. And then there is the fact that is literally slows down the computer and will interfere with your work day. These types of scans are best done overnight and should be done daily, especially if you are in a business that handles sensitive information. Its time business owners take responsibility for their client’s information. I am tired of hearing the lame excuses about how no one wants that information or the chances are 1 in insert a high number. These excuses allow these business owners to sleep at night, and they are poor ones at that. It’s time to spend the insignificant amount of cash to get a paid version of antivirus or anti-malware. Not sure which one to get, how about this try downloading the free version of Malwarebytes Anti-malware. Run a scan with it, if it finds even 1 object you should be paying for the premium version. For individuals this is going to cost $27.00 and sometimes less for 1 year subscription. For businesses this may cost about $30.00-$35.00 per year. The point is its extremely inexpensive. Far less expensive than if you had a major infection that wiped out your sensitive data or transmitted it to the right person. This isn’t expensive people, and it’s going to prevent and remove all those pesky malware infections and browser hijackers that you have installed because you decided to just click yes on everything that popped up. Yes it’s better to purchase a piece of security software, schedule it to update/scan daily; preferably overnight or during hours you won’t be using the computer. It’s more reliable than humans can be, it won’t forget to run. It won’t make up excuses and best of all it will keep you and your customer’s information safe by actively monitoring the system.

If you are a business or individual and you currently are running free security software and you think it’s good enough. It’s time to change. Go purchase Malwarebytes and install it. Run a scan and see just how good your free software is working. I think you will be unpleasantly surprised at the results. If you have an active IT person working for you that is supposed to be doing this, ask them how the systems are and if there has been any infections. If their answer is just a straight no, with absolutely nothing to follow you should go and download Malwarebytes Anti-malware on the systems and run it. You might find out that this IT person doesn’t know as much as they think or isn’t the right person for the job, especially if they are peddling the free software as being the best choice for you or your company.

Oh and before I forget. The image posted above. Its a real image of a real infection that has been spreading and infecting peoples computers around the world. However its a scam to scare you into paying a fine to the people who created the infection. I have handed this image to thousands of people and 8/10 immediately think its real because it says “Department of Justice Federal Bureau of investigations” on it. People this isn’t a real thing, the FBI would be kicking your door in if they wanted to see you, not sending cryptic please send us impossible to trace MoneyPak payments so we can remove this lock on your computer. If you thought it was real, and be honest with yourself. Its time you start learning about computers. They aren’t going away!